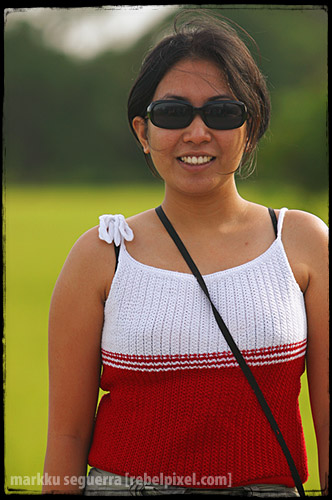 Once a year we do this thing where we get a chance to see her cry. You may know her as Michelle, to others simply Mic, and to some Micamaldita. But to all of us she’s the girl that’s been keeping the spirit of volunteerism alive in Pisay ’96. Happy, happy birthday Mic! Pre-register for the homecoming to get your free tickets!

RE: ON-LINE pre-registration for the Alumni Homecoming September 1, 2007

To enable us to provide a very organized and enjoyable Alumni Homecoming evening on September 1, 2007 we have created an ON-LINE pre-registration. What are the advantages of registering on-line?

a) No need to line up to register when you arrive
b) You are reserved a free ticket for food and drinks up to 7 pm (tickets not claimed on or before 7 pm will be provided to walk in alumni) We are preparing for only 600 possible attendees to the homecoming hence only 600 free tickets for food and drinks have so far been allotted.
c) Presently we are still preparing a reward or raffle ticket package for early registrants (ex. Buy one and get one free raffle ticket)
d) Early registration allows the organizers to estimate the number and the profile of attendees and therefore prepare better music, food, drinks, dÃ©cor and other accommodations.
e) Souvenirs, important announcements, newsletters, postcards and other PSHS homecoming materials may now be mailed, e-mailed or even texted to you. “For the unexperienced, invest in your soul.” This Saturday, May 19, is our official launch for the upcoming book drive, a joint event with the election–related concert in the poster above. In partnership with Rock Ed Philippines, we hope to collect a good number of books that we in turn will be forwarding to our beneficiary schools in the coming weeks. Last May 11, we had a soft launch for our Pisay ’96 Book Drive at the BL_E Without U Bar with our band Pop Ratio doing some songs. Yes, this is the same project as the internally nicknamed “Albert Camacho Book Drive.”

The turnout was surprisingly good with several batchmates (plus friends) making it to the evening’s events, especially with the presence of some who pleasantly surprised us with their sackful of books (ikaw yun Ispok!) and humanely–touching ideas (at ikaw yun Jao!).

The night’s second part was a never–ending videoke fest and party, better explained through BryMac’s photos of the evening.

Seriously, we now have two projects in the pipeline, namely the book drive and the maximum security concert slated for sometime next month. We are working with Rock Ed Philippines for both projects to further maximize our resources and effectively reach our collective goals. For more details, please do listen to the podcast.

And yes, Episode 4a was actually recorded after Episode 4b. Go figure. :D On May 19, we will be launching our batch’s book drive which has been planned for some time now, just in time for the beginning of the school year. In partnership with RockEd Philippines, there will be a concert to officially start the collection of book donations that we in turn will be giving to our beneficiary schools and communities. More details in this episode of Pisay ’96 Radio.